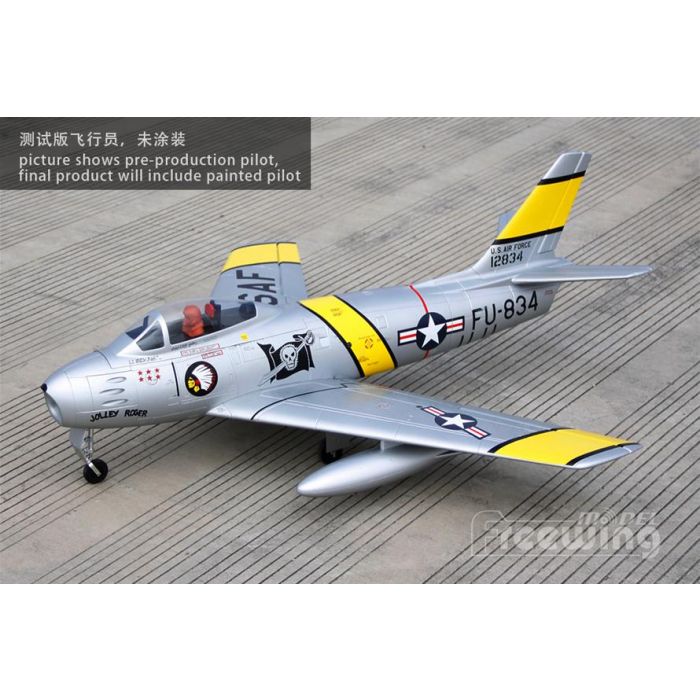 We at Aerobertics have a lot of expierence with Freewing models, and are glad to have many models and spare parts in stock for you. Not sure which model to choose? Any questions about a model or spare parts? Don’t hesitate to call us, or send an e-mail. We are ready to help you.

The Freewing 80mm EDF F-86 Sabre is modeled after the North American F-86F that was flown by USAF Ace Captain Clifford D. Jolley. Captain Jolley, call sign "Jolley Roger", flew in the 4th Fighter Interceptor Wing of the 335th Fighter Interceptor Squadron (Chiefs) during the Korean War and is credited with seven confirmed enemy victories. Such a famous plane deserves a scale model which lives up to legend of Captain Jolley, and Freewing has delivered with the 80mm EDF F-86. The first thing you will notice about the Freewing F-86 is it's scale appearance and accurate proportions. You won't find a non-scale, over-sized intake on this jet; Freewing has created this famous jet in perfect proportions while not sacrificing performance. Speaking of performance, the Freewing F-86 uses the new 80mm 12-blade EDF with metal housing combined with a powerful 1750kV motor to produce nearly 6 pounds of thrust for awesome speed and incredible maneuverability. The sound produced from the 12 blade EDF is sure to turn heads at the flying field. While 5 and 6 blade EDFs produce a high pitched whining sound, the 12 blade EDF with metal housing produces the "whoosh" and air crushing sound similar to a gas turbine jet. Additional upgraded features include an 80A Hobbywing ESC, 9g precision servos, electronic retracts with full metal shock absorbing struts, scale drop down flaps, and magnetically removable drop tanks. Keep Captain Jolley's legend alive, own the Freewing 80mm EDF F-86 Sabre Fighter Jet.

With the building time being only 2 hours, this plug and play model is ready to go in no time!