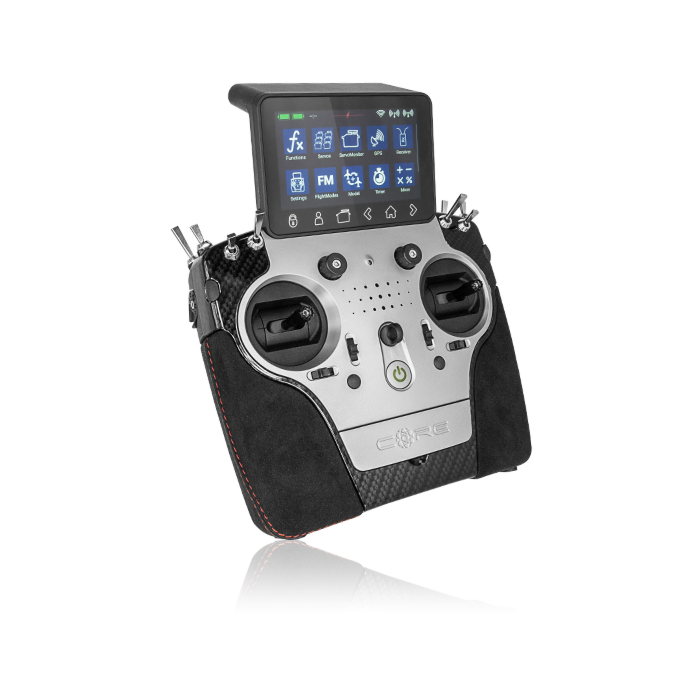 Since the introduction of the CORE early in 2019 Powerbox has seen the establishment of a steadily growing community of pilots who are determined to make full use of the advantages of this unique radio control system. Ultra-simple programming - even where complex models are involved - redundancy in the battery and radio circuits, and huge potential for the future: all these features very quickly made a deep impression in the marketplace once the first systems had shipped.

They have a highly motivated team of developers working continuously on expansions and improvements to the system. We also receive ideas from customers which we always consider, to ensure that we provide the maximum possible in terms of performance and facilities. Every transmitter is hand-assembled to the customer’s precise specification in our factory at Donauwörth, where it is also checked. This means that the system is designed, developed and produced all under one roof - genuine “Made in Germany”.

Radio transmission
The radio link is based on an extremely effective frequency-hopping process in the 2.4 GHz band. The system range of more than 9 km is unique in the marketplace, and offers the unprecedented system reserves which are essential for maximum safety and security - especially where conditions are difficult.

The CORE features a redundant radio link which is monitored by the receiver. If a fault occurs in one transmission circuit, the receiver can immediately warn the user of the problem via telemetry. The system’s reliability and interference rejection characteristics have already been demonstrated at a number of major flying events. Even when RF conditions are extremely unfavourable you can rely on the CORE.

Power supply
PowerBox-Systems is famous for its redundant power supplies, and the CORE’s power system naturally incorporates this: two separate Li-Ion battery units are used, each rated at 3400 mAh / 7.2 V, and the entire power regulation circuit is also duplicated - a feature currently available only in the CORE. The transmitter’s operating time is around eight hours, measured with the screen set to maximum brightness and the system at maximum load.

High-speed signal transmission
The CORE provides 26 channels, each with 4096-bit resolution. Despite this, the control data are transmitted using a 10 ms frame rate with zero delay. All channels have full resolution, and there are no limitations to the frame rate.

Telemetry
Telemetry has already become a fundamental feature of all models, and it will become even more important over the next few years, so we have given high priority to this aspect of the system.
Telemetry handling and transmission has been the subject of a comprehensive redesign process, with the result that up to 240 sensors can be connected to the P²BUS, each generating 32 data values, and the system is capable of transmitting up to 800 x 16-bit values per second. For the future this level of performance opens up entirely new possibilities, such as real-time servo monitoring in the model. Since the system’s introduction we have developed a series of sensors here at PowerBox-Systems, all of which are simple to connect to the P²BUS - ‘Plug ‘n’ Play’. However, the P²BUS telemetry interface is also open to third-party suppliers, who already offer software updates for their existing range of sensors. The customer simply has to load a software update, and can then continue to use his stock of sensors without problem.

Setting the configuration and parameters of the entire telemetry system is a convenient procedure carried out at the transmitter using the 2.4 GHz radio link.

Linux with smartphone features
The CORE incorporates a modern, high-performance industrial Linux PC, which is controlled entirely using the integral touch-screen. The software’s basic look and feel are identical to the typical smartphone. An intuitive user interface provides fast access to all associated settings, with the result that models can be programmed with the minimum of input effort.

Every feature of the user interface has been programmed using Toolkit Qt. Nowadays this development environment is virtually the standard in the sphere of Embedded GUIs, and is employed by many renowned manufacturers.

The transmitter screen is manufactured to the specification of PowerBox-Systems, and is very clearly legible even in bright sunshine. A light touch on the surface of the capacitive touchpad is all that is required. The smartkeys (quick-select buttons) located at the bottom edge of the screen provide instant access to important functions such as Servo Monitor and Screen Lock.

Internal data communication is implemented via the CAN-BUS. This proven bus system is absolutely ideal for our use, and has already been employed successfully in the car and aviation industries for several decades.

Clear evidence of our system’s high-speed processing is found in the Servo Monitor: when the transmitter controls are moved, the screen responds totally in real time! As standard the Linux computer features OpenGL support, which provides almost unlimited scope for graphics, even in the future.

The two stick units are machined from solid, are fitted with quadruple ballraces and sample every control input at 16-bit resolution. The resultant 65,535 increments are passed digitally with zero losses to a high-performance digital signal processor, which is then responsible for signal processing. All four supplementary linear controls - two side-mounted, two at the top - are also fitted with Hall sensors, and each incorporates two ballraces. This means that the whole CORE transmitter is immune to mechanical wear.

Fundamentally the transmitter is supplied fully equipped - with the exception of the toggle switches. Each transmitter is assembled individually at the factory to the customer’s specification. Stick-switches, locking switches and a wide range of other switch types can be installed at the factory, or retro-fitted by our Service department. Accessibility to the switches is good, enabling the customer himself to swap them over without difficulty.

The final feature of the transmitter is the set of four momentary switches located below and adjacent to the sticks on both sides. These are ideal for controlling auxiliary functions including wheel brakes, electric starters or smoke pumps, and can be operated without having to release the sticks.

Look and Feel
Any pilot picking up a CORE transmitter immediately feels “at home” with it: all the switches are arranged just as you would expect from a High-End system. The operator is presented with a professional “tool” which he can instantly understand and use. The detachable hand-grips are finished in Alcantara, which ensures a pleasant feel to the hands at every season of the year as well as looking superb. The transmitter’s Centre of Gravity is designed to provide perfect balance.

Highlights
A particular feature of note is the unique speech output system. Other systems require the pilot to create audio files on a PC and then laboriously copy them to the transmitter, but the CORE is fitted with a licensed TTS (Text to Speech) server from Acapella. This is currently the most sophisticated TTS system available, and offers a number of different voices for each language; these can be used individually to announce telemetry values or switch positions. Upon request you can even set up a landing reminder spoken by the Queen of England!

A further unique selling point of the CORE system is the facility to update receivers using the 2.4 GHz radio link itself. Never again will the pilot be obliged to remove a receiver from the depths of a model in order to load a software update into it. A simple button-press is all that’s required, and thirty seconds later the receiver is fully up-to-date again.

The CORE transmitter even includes Bluetooth and WiFi as standard, and in future the latter will send telemetry data to a web portal, so that the information can conveniently be analysed later on a smartphone or PC using web browser software. Model memories and other data can also be managed in this way from the transmitter.

To complete the hardware a GPS system and a 9-axis motion sensor are included in order to keep all options open for future applications.