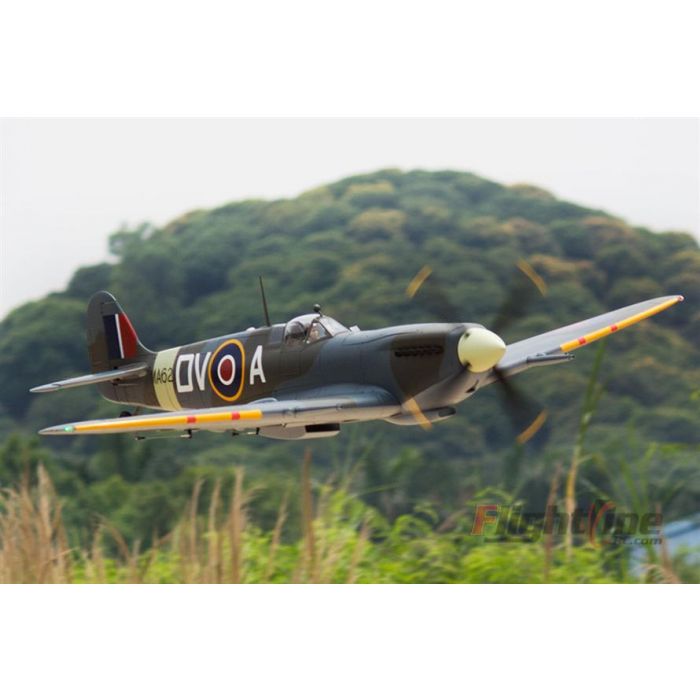 FlightLineRC is a leading brand produced by Freewing Model in partnership with Motion RC! We will bring you a new series of propeller driven aircraft at the same level of quality and value you trust from Freewing Model’s EDF aircraft and other products. FlightLineRC inherits Freewing’s goals of outstanding innovation, exquisite design, high quality, unbeatable value, and dependable performance.

The Supermarine Spitfire is one of the most popular warbirds in history. This British single-seat fighter was used famously by the Royal Air Force and the Allies, earning distinction during the Battle of Britain and throughout World War II. Over 20,300 aircraft were produced with more than 24 variants. The Spitfire’s versatility and maneuverability made it a lethal aircraft against Axis forces. The Spitfire continues to fly in modern times as a tribute to aviation history and military veterans.

This FlightLineRC Spitfire Mk.IXc is approximately 1/7 scale, with a 1600mmm wingspan and 1350mm length. It is molded from EPO foam, featuring a scale shape and smooth surface. The main wing is assembled from hollow parts and an interlocking plywood and carbon fiber frame, providing lower weight and higher strength than a solid foam wing. The main wing and horizontal tail are attached with screws for very convenient transport. Proper ventilation is also designed to keep the electronics cool. The large battery hatch and removable battery bay floor provides easy access to an organized battery and receiver compartment.

The stock PNP version is equipped with a 5055-390KV brushless outrunner motor and scale 4-blade propeller and 80A ESC. With the recommended 6S 4000-5000mAh lipo battery, the Spitfire MK.IXc has a level top speed of 125kph/75mph, with tall vertical power and 4-8 minutes of flight time depending on throttle management. To enhance grass performance, the main landing gear use shock absorbing Oleo struts, a main wheel diameter of 85mm, and a tail wheel diameter of 45mm. Metal reinforcement plates, thick steel strut pins and axles, and metal trunions work together with the suspension struts and soft wheels to dampen the forces caused by operating this aircraft on rough runways. The FlightLineRC 1600mm Spitfire Mk.IXc was optimized for very gentle handling, suitable for intermediate pilots and above. The Take off, flying performance, and slow speed handling is especially stable. A very predictable stall and power on recovery make the aircraft easy to control throughout any aspect of flight. Bright LEDs also aid in visibility of this large and beautiful foam electric model aircraft.