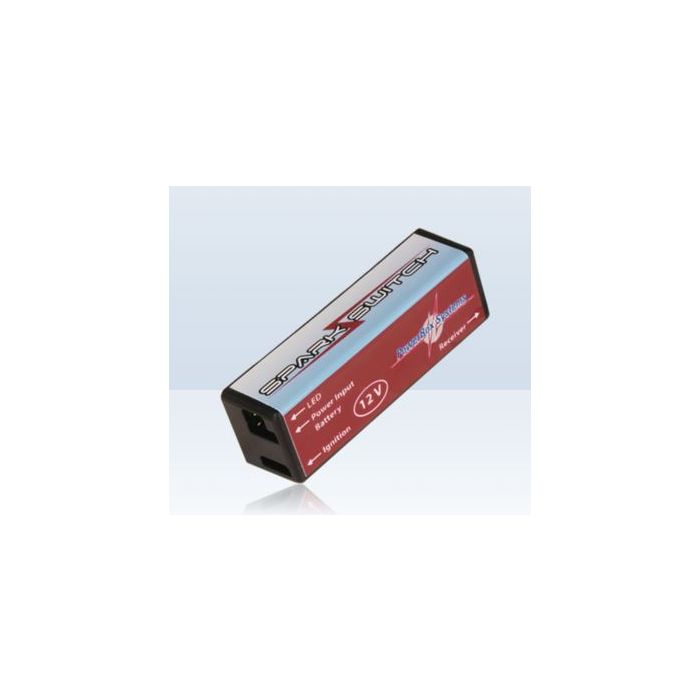 The ignition switch is immediately ready for use as supplied, and needs no setting up. The only requirement is to set up the switch channel at the RC system transmitter.

The SparkSwitch can be used to turn the ignition circuit on and off from the transmitter, and is suitable for use with power supplies consisting of NC, LiPo or LiFe cells.

The output voltage is subject to linear stabilisation, and is regulated at 5.9 Volt (alternativ 7.4V and 12V): a value which is suitable for all types of ignition system.

The separate plug-in ultra-bright 5 mm LED should be mounted in the area of the engine cowl, in order to indicate the switched state.

A particularly user-friendly feature is that the unit detects when the receiving system is switched off, and draws no current from the ignition battery thereafter.

This means that there is no need for an additional switch between the battery and the SparkSwitch, and forgetting to switch off the ignition battery is no longer a problem.

As you would expect, the battery can also be recharged without being disconnected.

The power circuits for the receiver and the ignition system are isolated from each other by an opto-coupler, effectively preventing interference from reaching the receiver.

The set includes accessories such as two connecting leads and the LED and mount.

The SparkSwitch has also proved excellent in practice as an electronic switch for supplementary working systems such as lighting circuits.