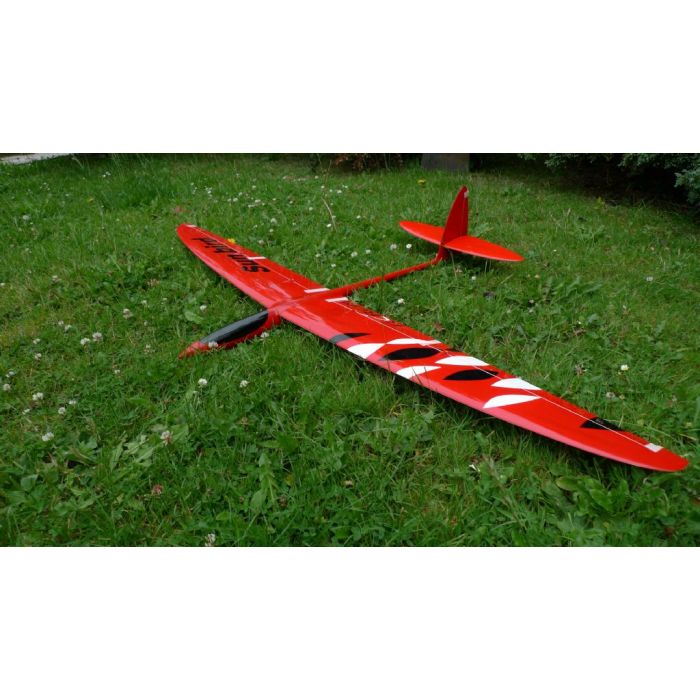 We at Aerobertics are RCRCM dealer since 2010 and have flown many different models like the Sunbird, Typhoon, Strega, Tomcat, Tucan, … this makes it possible to give you the best advise.

Not sure which RCRCM model you should choose ? Don’t hesitate to call or e-mail us !

The Sunbird is an all molded composite glider with remarkable quality finish. It features ailerons and flaps allowing many mixes for better performance.

Sunbird represents all the things we love about the bigger birds, in a more convenient package. Sunbird is part of a new generation of compact, precision, full composite, hollow molded hotlines racers. This new generation of fast airplanes is designed and built to be extremely lightweight with great strength and full competition capabilities. From its super-efficient X-Tail, to its generous nose area, this little Sunbird was built for fun! Like it's larger siblings, the Sunbird sports ailerons and flaps on its two piece wing. The aerofoil section is probably quite advanced for this kind of plane and gives a very wide speed range and possibility of operation in a wide range of wind conditions. Added to that, the radio bay is large enough to enable installation of the servos and radio pack without resorting to micro surgery, while the fuselage and in fact the whole plane still has a pleasing and balanced shape.

Carbon Version: Wings built using carbon cloth as well as fuselage reinforced with carbon from leading edge of the wing to the tail. This configuration gives the model enormous stiffness and torsion stability.

This is the fiberglass version.

Another important thing is about the surface of airplane: RCRCM airplane is fully moulded, Mould precision ensures that each airplane has a complete aerodynamic layout. Yet in the process of composite airplane production, there seldom causes little tiny air bubbles, slight cloth grain, it shouldn’t be seen as a quality issue as it doesn’t affect flight.

About how to storage airplane : It is better to keep an airplane vertical hanging if it’s not flown for a long time. Keeping the plane vertically, never gives stress to the airplane, especially the middle of the airplane, this can prevent eventual distortion.