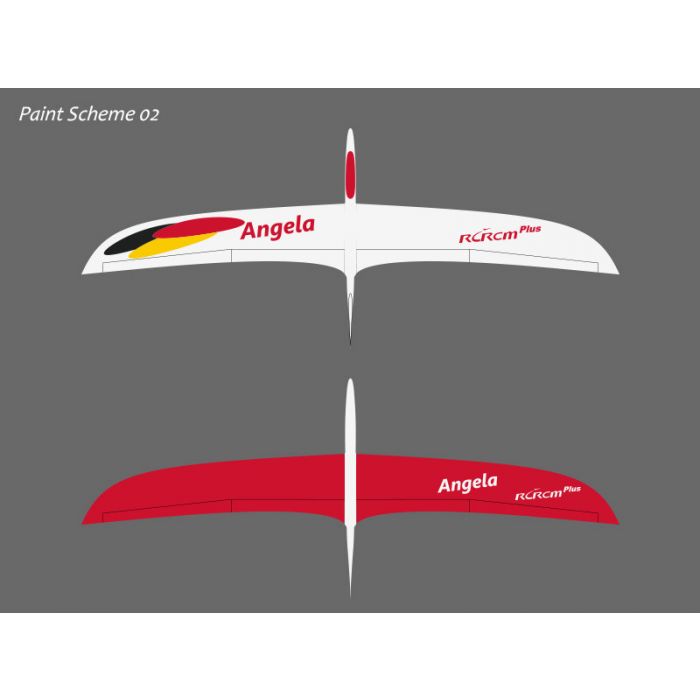 We at Aerobertics are RCRCM dealer since 2010 and have flown many different models like the Sunbird, Typhoon, Strega, Tomcat, Tucan, … this makes it possible to give you the best advise.

Not sure which RCRCM model you should choose ? don’t hesitate to call or e-mail us !

Superb flying wing - Angela is fully molded with composite material, it has good performance in slope soaring. Angela is equipped with ailerons, flaps and rudder. It looks like a “pterodactyl” when flying in the sky!

Carbon Version: Wings built using carbon cloth as well as fuselage reinforced with carbon from leading edge of the wing to the tail. This configuration gives the model enormous stiffness and torsion stability.

This is the carbon version.

Another important thing is about the surface of airplane: RCRCM airplane is fully moulded, Mould precision ensures that each airplane has a complete aerodynamic layout. Yet in the process of composite airplane production, there seldom causes little tiny air bubbles, slight cloth grain, it shouldn’t be seen as a quality issue as it doesn’t affect flight.

About how to storage airplane : It is better to keep an airplane vertical hanging if it’s not flown for a long time. Keeping the plane vertically, never gives stress to the airplane, especially the middle of the airplane, this can prevent eventual distortion.