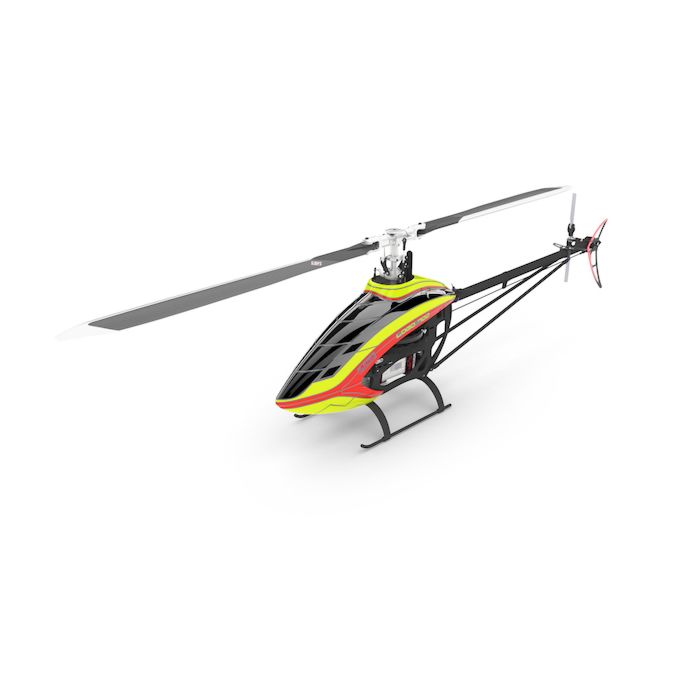 Systematically designed and put to the test, for tough competition flying.

The ideal 700 size machine, for every pilot, for every style of flying.

The LOGO 700 is the worthy successor to the venerable LOGO 700 XXtreme.

It utilizes tried and tested mechanical components like Herring bone gear with a smaller main gear, with a steeper angle (136 T, 25°), for a sleeker silhouette, less weight and improved running noise.

Belt step-up gear to the tail gear box in the chassis.

The new four-part chassis made from fiber-reinforced molded plastic is lighter and torsionally more rigid than a traditional carbon-aluminum chassis.

The benefits at a glance: Facilitates assembly, maintenance and repairs.

The upper halves take up the entire mechanics including motor, ESC and servos. Servos are mounted directly into the chassis, with optimal position and angle in relation to the swash plate.

The lower halves take up the new and already known and proved battery quick release system (like on LOGO 500/600).

Batteries will be installed to battery plates inline, which are held by two quick release mechanisms on both sides of the chassis.

The clever separation of the chassis parts increases the possibility that, after a crash, only the lower parts have to be replaced. The chassis sports a big locating surface for the ESC, an opening helps with the air flow around the ESC. In the chassis you find a place for e.g. a CPU cooler, so you can mount a motor cooler into the model permanently. Cable guides inside the chassis allow for a neat and protected wire-layout to the ESC/telemetry at the front, within the chassis. The clever design of the molds even allows maintenance of the tail gear box inside the chassis, without disassembling the chassis. The torque tube system makes the tail boom easily dismountable, in case you want to travel e.g. to competitions. The newly designed rotor head is lighter and looks more delicate, but at the same time gives you the same good flight- and control characteristics. It’s as robust as ever. Recommended main rotor blade sizes are 690-717 mm, depending on your personal taste and style of flying. To power the 700, you can rely on reliable components from the LOGO 700 XXtreme, with 6 mm motor shafts. Motors with other shaft diameters can be adapted easily by just replacing the shaft. In the beginning, there will be two gear ratios available: 10.46:1 with a 13 T pinion or 9.71:1 with a 14 T pinion. Motors with a larger bell than e.g. a Scorpion 4525-520 can also be used: just replace the stock main gear with the larger one from the LOGO 700/800 XXtreme, including the one way bearing and an appropriate pinion. The newly designed canopy of the LOGO 700 combines the known and appealing design and visibility with improved aerodynamics: the LOGO 700 accelerates faster and reaches higher top speeds when directly compared to it’s predecessor. This helps especially with swift transitions within or between 3D maneuvers and big air aerobatics. Color accents to the tail fin also help with visibility. With off-the-shelf components and 5,000 mAh batteries, an all-up-weight of 5,300 g / 11.86 lb is possible.